With the recent advancement of technology, the availability and accessibility of stable signal sources has become within reach of an average radio home brewer. The newer versions of super stable and very dependable synthesizers based on both phase lock loop and direct digital synthesis are available for a moderate price. In addition to their accuracy, they usually come with an ornamental frequency display as well, to decorate the front panel of your rig.

But for the minimalist QRP enthusiast X-tals are usually considered the cheapest stable alternatives. In practice though; they are undoubtedly cheap and stable but they do not offer the needed agility. Recently some good VXO designs have been published by some ham friends those offer the desired agility to work.

In almost all of the projects I described, I use VXOs and I preferably advocate them as a low cost Scrooge's first choice. In this post I describe two ceramic resonator dual band VXOs, those can be adapted for X-tal operations as well.

1. BIPOLAR VXO: The bipolar VXO circuit uses three transistors, first of them wired as a colpitts oscillator. A common 3.58MHz ceramic resonator is used to produce oscillation. A varactor type tuning method is employed. I use a 5mm red LED as a varactor diode. Alternatively 1N5808 type diode can be used for this purpose as they exhibit linear tuning. A good quality ten turn potentiometer is recommended for the tuning control, preferably mounted with a calibrated rotary dial. 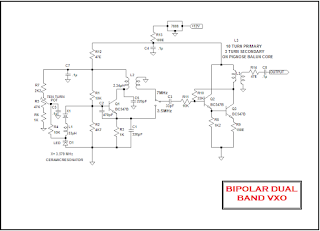 Q2 and Q3 are wired as a buffer amplifier that provides a reasonable output of about +17dBm. L2 should be wired on an eight mm dia slug tuned former with about 13 turns of primary and five turns of secondary. I used 28 SWG copper wire for the windings. If you use a toroid core for L2, add a trimmer capacitor parallel to C6 for fine tuning. C1 and C2 should be NP0 type or you can try styroflex type capacitors. L1 should be a moulded RF choke of about 10uH or more. In my version I just used the primary winding of an old 455KHz IF transformer with its internal capacitor removed. It measures 33uH. The VXO provides exceptionally stable signal even from the cold start. It provides about 80KHz tuning on 80 meters and about double on the forty.

2. DIGITAL VXO:  VXOs can also be built using digital invertor chips as these are cheaply available, these days. I have built many of them using 74HC04, 74HCU04 and CD4069 etc. The "U" suffix represents unbuffered version of the invertor and is usually preferred version for such applications. Though these chips are designed to be used at 5 Volts supply but they can work happily till 6 Volts and deliver a little more output; about 24mW. This level is sufficient to drive a diode ring type double balanced mixer. The schematic diagram of such a VXO is shown below: 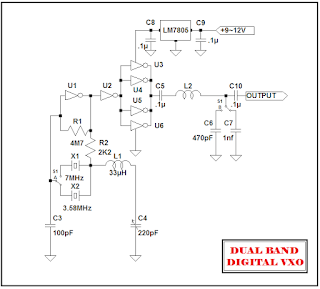 C4 is an old ex-BC receiver component that can be replaced with a varactor arrangement for tuning, if required. L2 is wound using 32SWG, 11 turns close wound on a former made from the body of an old ball pen. The output low pass filter is included to filter out harmonic products that can cause erroneous harmonic mixing in the mixer, since being square wave the output of this VXO is rich in harmonics.

Both the VXO circuits illustrated above can be used in a variety of home brew direct conversion designs. Apart from ceramic resonators, three to four crystals can be used in parallel. I am using four 5MHz crystals cheaply available for use in microcontroller projects, in a bipolar VXO circuit mentioned above to provide coverage of QRP segment of 40 meter band on bitx. Mouser also lists 4.915 MHz ceramic resonators those can be used for a bit wider band coverage.

An FLL can be used for more frequency precision. If you like to add a simple frequency counter, you can try Fredy's (DJ3KK) SPRAT counter. It uses an eight pin u-controller 12F675, thus it is very small and cheap and announces frequency in Morse, through a small piezo buzzer.