For the last  few weeks I have been busy twiddling  with my little QRP BITX rig. Of late, I have come across some problems and have devised some mods to these problems  and I feel these worth sharing  with  you.

1. IMPROVED MIC AMPLIFIER: I felt that my BITX suffers from low microphone  sensitivity. You have to speak quite loud to get the signal properly modulated. A crass examination  of the microphone amplifier revealed that values biasing components seem to be little inappropriate and need to be recalculated. 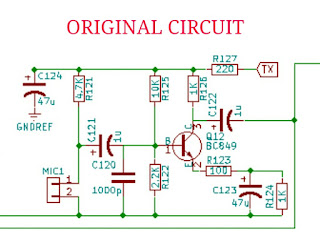 Values of R126 (collector load of Q12), the mic amplifier  transistor and R 123 (emitter swamping resistor) are thus recalculated  and are replaced with a resistance of 4K7 for R126 (in place of its original  value of 1K) and R123 is replaced with  a value of 10 ohms ( in place of 100 ohms). You can spot these components near the left edge of PCB. 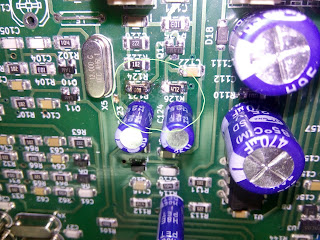 The results of this simple modification were immidiately recognizable and were as expected. The rig now has required  microphone sensitivity and transmissions  are reportedly better.

2. CLICK FREE BITX MOD. : One annoying thing about BITX I felt is relay clicks and clicks caused by relay K2 in audio line.  Consequently  I decided to implement solid state circuitry to replace both relays used for TX/RX supply switching  and antenna changeover. The supply switching  circuit  is built on a pigmy  board as shown below : 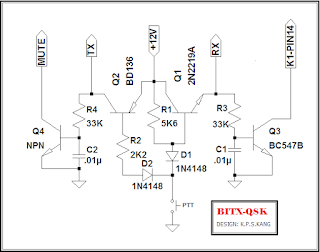 During RX transistor conducts andRX stages get supply to work. During this condition Q3 grinds the pin 14 of K4 (Ex)  to ground the drive to pre-driver stages of the RF power amplifier. When PTT is pressed Q1 turns off and Q2 conducts to extend supply  to TX stages. During this period Q4 conducts and it's collector grounds the top (live) end of volume control causing the RX to mute. C1 and C2 ensure reliable switching  function even if a spurious RF radiation picked by the base of these transistors. It is necessary to remove capacitor C11 connected to the base of transistor Q1, for this MOD. as the antenna changeover function is performed by the following circuit : 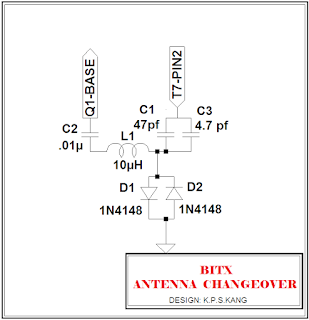 I used an axial type moulded inductor readily available  in local market  for this MOD. However you can wind Your Own on a toroid available  to you.  The values of the components are not critical and are readily available. The results of this  MOD.  are really  satisfying. A professional  click free QSK experience.

3. AN R.F. BASED AGC MOD. :    BITX is a good  portable  rig  but its major handicap is that it lacks AGC. Though an AVC (automatic  volume control) circuit can be used to compensate it and is available online. I decided to include a more convincing RF AGC circuit to my BITX. Primitively it was thought to apply AGC through IF amplifier stages in a conventional design topology. So I thought  to put a transistor or a FET in the writer circuit of IF amplifiers as shown below. 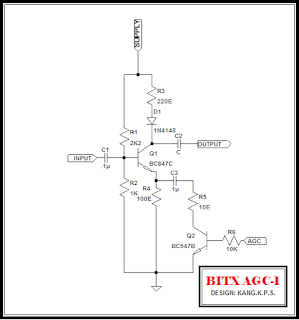 The AGC voltage applied to the base of Q2 will cause to vary the current t in its collector circuit thus controlling the overall IF gain. But it was thought afterwards  that instead of course controlling the gain at IF level it would be better to control it before the mixer that would be an incentive considering the IMD performance of the mixer and all stages following it.  Consequently the following topology was initially thought to provide an effective AGC at RF stage. 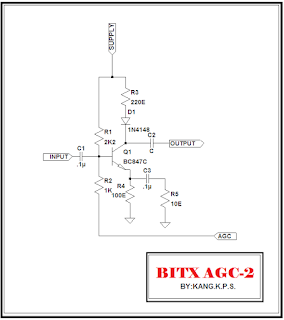 But in this case reducing the base voltage of RF amplifier can adversely affect the overall IMD performance of this stage. So after a detailed  analysis I reached the conclusion to use a FET to replace the Q1 based RF amplifier of the original design.  The resultant design is as under: 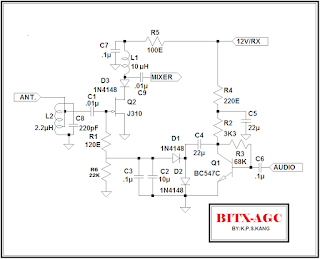 Audio signal is picked up from the hot end of the volume control and is amplified by transistor Q1. An AGC signal is then generated through  diodes D1 and D2, which is then used to control the gate bias of RF amplifier and thus its gain. The entire circuit is built on a small pigmy board and is installed close to the original BITX board. As the output of amplifier is about 440 ohms, you need to adjust primary turns to about the double of turns of other windings for a proper match. The results are as expected. Tuning through a crowded band full of 59+ signals is no more a bane.